Earlier this month, our friends at PrepaidPhoneNews.com  reported on a research study released by industry research firm, Wave7. In it Wave7 Principal, Jeff Young, says that these results are that of

its  Independent Prepaid Dealer Survey for Q1 2020 . The survey tracked prepaid brand distribution and sales at 30 independent, multi-brand dealers in 12 NFL cities. Dealers were asked which prepaid brands they carry and which were their top sellers.

Once again, the TracFone brand ( Simple Mobile ) dominate the results in terms of distribution. Simple Mobile was also the top selling brand in the last survey results.

Ranking number one on the questioned dealers list was Simple Mobile. Prepaid Phone News characterized the finds of Young's survey as such;"This quarter's winners show the same rankings as the last report, with winners Simple Mobile, H2O Wireless, Ultra Mobile, AT&T Prepaid, and Verizon Prepaid. Simple Mobile was available at 21 of the 30 dealers and one of the top two sellers. H2O Wireless had a presence at 21 stores and had a top three finish at 11 dealers. There were some dealers who commented on the recent iPhone features launched, like FaceTime, MMS, and group messaging. Ultra Mobile improved from the Q4 2019 survey with presence at nearly half of the dealers, 7 of which picked the MVNO as the top two seller. This quarter showed improved rankings for both AT&T Prepaid and Verizon Prepaid, which were both mentioned by half of the surveyed dealers."Also, and interestingly,  Wave7 remarked the entry of two brands in the survey: Tracfone and Gen Mobile. Two dealers mentioned Tracfone, for the first time in survey history. One dealer mentioned Gen Mobile. This is the second survey that Gen Mobile was mentioned in.For this quarter, Wave7 called  T-Mobile Prepaid ,  Metro by T-Mobile ,   and  GoSmart  as the survey losers. T-Mobile has been putting less effort into its independent dealer channel and it showed in the survey results.Here's the raw data from the survey (Q1 2020 numbers are in parentheses). Note that both Q1 and Q4 survey included 30 dealers. 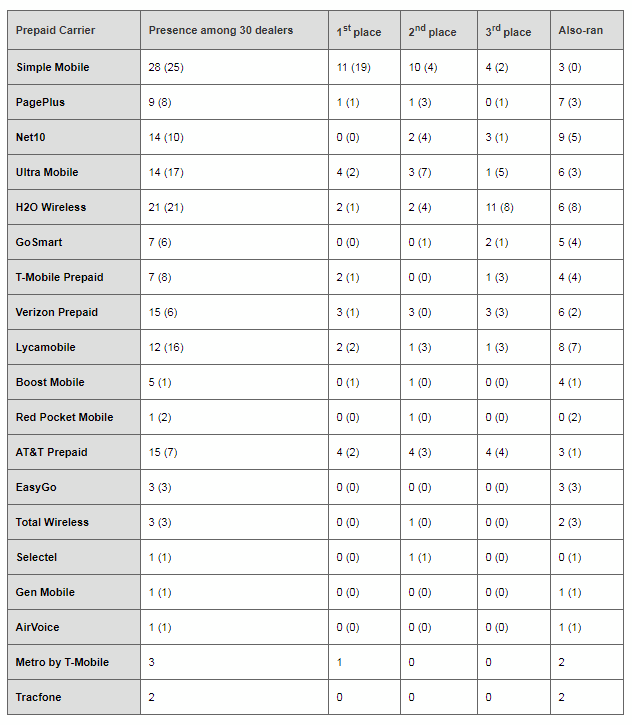 Story and back links credits to: